This review was originally posted on Swampflix.com on July 25, 2016. The rating was 4/5 Stars. Image courtesy of Swampflix Editor Brandon Ledet. 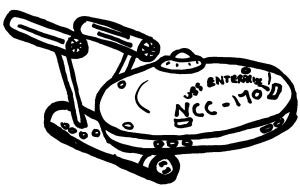 A few months back, I wrote about the then-upcoming release of Star Trek Beyond and discussed my hopes for the film and the franchise in general. I wasn’t particularly excited after the first trailer, but the second trailer seemed a bit better, and the fact that Simon Pegg was one of the credited writers was certainly a point in the film’s favor, given his actual fondness for the franchise (in comparison to Roberto Orci, which I’ll get to in a minute). A generally favorable early critical response was also heartening, despite the general dearth of any significant marketing push for the film. I did see the same TV spots play before almost every YouTube video I watched in the past three weeks, but I can never tell if that’s marketed to me specifically as a Star Trek scholar or indicative of a larger initiative. And, as a scholar, was I satisfied?

END_OF_DOCUMENT_TOKEN_TO_BE_REPLACED

This review was originally posted on Swampflix.com on July 17, 2016. The rating was 4/5 Stars. Image courtesy of Swampflix Editor Brandon Ledet.

Like most people my age (I was born in 1987), my first experience with the Ghostbusters came not in the form of the 1984 comedy classic; instead, my love for all things Ghostbusting was the result of watching the animated The Real Ghostbusters as a kid. In fact, watching the cartoon adventures of Egon, Venkman, Ray, Winston, and Janine on Saturday mornings, alongside Teenage Mutant Ninja Turtles and Garfield and Friends, is one of my earliest memories; unlike TMNT, I can actually remember particular episodes and character types from Ghostbusters (I know that the Turtles theme song delineates each turtle’s individual personality, but that blew right past me as a kid and I couldn’t tell you which one was a “party dude” right now to save my life). I didn’t see the original film until I was a little older, and even then my clearest childhood memories of the movies actually comes from Ghostbusters II, where the pink slime that fills Sigourney Weaver’s bathtub made me terrified of the tub for a few months.

END_OF_DOCUMENT_TOKEN_TO_BE_REPLACED

This review was originally posted on Swampflix.com on July 4, 2016. The rating was 2.5/5 Stars. Image courtesy of Swampflix Editor Brandon Ledet.

Several years ago when Rob Zombie’s Halloween remake was first announced, I asked my neighbor and fellow horror fan Drew if he thought it would be worth seeing. In his trademark bombast, he declared that there was no point; the original Halloween had spawned so many imitators and copycats over the ensuing decade that the movie had essentially been remade dozens of times.

END_OF_DOCUMENT_TOKEN_TO_BE_REPLACED

This was originally posted on Swampflix.com as part of that site’s “Movie of the Month” feature, in which one contributor makes the rest of the crew watch a movie they’ve never seen before, and the staff discusses it afterwards. For July 2016, I made Britnee, Brandon, and Alli watch Citizen Ruth (1996).

Boomer: Citizen Ruth is twenty years old this year, but the topics that it tackles and the way that it approaches those ideas is both frank and depressing. Reproductive rights and agency over one’s body are, sadly and frustratingly, still topics that the public sphere considers to be up for debate, just as they were in 1996. The film tells the story of Ruth Stoops (Laura Dern), an homeless drug addict and frequent tenant of the local jail, who has had four different children taken from her by the state because of her overall unfitness to care for herself, let alone a child. After she extorts some cash from her brother (who has custody of two of her four kids), she buys a can of patio sealant and huffs it in an alley, where she is discovered in a daze by local police. At her hearing, she learns that she is pregnant for the fourth time; the state has chosen to pursue felony indictment of Ruth for her endangerment of the fetus. A kind judge suggests to Ruth that an “accident” could reduce this charge to a misdemeanor, but she is convinced otherwise when a group of anti-abortion crusaders led by Gail Stoney (Mary Kay Place) spends the night in the same cell. The Stoney family, including patriarch Norm (Kurtwood Smith) and teenaged daughter Cheryl (Alicia Witt) take Ruth into their home. Ruth takes the first opportunity that she can to get high, ending in an altercation that leads Pro-Lifer Diane (Swoosie Kurtz) to offer her home to Ruth as well, but she turns out to be a mole for the Pro-Choice movement, along with her domestic partner Rachel (Kelly Preston). Soon, both sides of the debate are raging against the other over the future of Ruth’s unborn child, represented by Pro-Life champion Blaine Gibbons (Burt Reynolds) and Pro-Choice queen Jessica Weiss (Tippi Hedren).